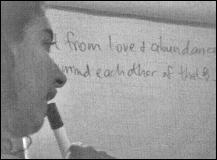 I consulted full-time on a “joyful value exchange” (aka gift economy) basis from 2004-2016. Presently my fee structure is in transition, please inquire for more information. In the end, the most important factor for me in accepting work requests is, “Is it in my heart to do this job at this time or not?”

This page is maintained for historical reference. It outlines one way of operating effectively on a gift basis which inspires others, and the resources it points to remain useful for all those who envision an economy restructured to more fully serve life.

How Are My Rates Set?

I am currently operating on a “joyful value exchange” (by JoVE? 🙂 ) basis, meaning i do not have any set fees for my work. I ask groups to pay me an amount that feels good and right and fair to them, that they can afford, and that they can give joyfully. The same request applies to individuals attending public workshops. Group process work provides my livelihood, and i trust the groups i work with to honor this and provide the support that makes it possible for me to continue offering my services.

Why Do I Do It This Way?

According to “Wikipedia” (which is a fine example itself) a gift economy is an economic system in which participants give away things of value to the shared benefit of the community. Examples include food banks, volunteer fire companies, and giving rides to hitchhikers. I see Sharing Economy as a broader term that may also include, for example, time banks, crowd-funding, and even local currencies.

In the summer of 2004, i encountered three different influences which inspired me to move in this direction. First, i met a friend who had lived outside the monetary economy for over seven years, refusing not only to work for money, but also to do work exchange or barter; basically refusing any kind of commodified relationship with another humyn being. Second, a personal growth workshop offered regularly at an intentional community near my home started doing their workshops on a donation basis. Third, i went on the Superhero ride, which involves a group of people coming together through word of mouth, inventing superhero identities and costumes, then bicycling out into the world (capes flying gaily over bike trailers filled with food and camping gear) for a month to find people in need of loving service.

Collectively these experiences resulted in a commitment on my part to engage in my work on a gift economy basis for one year. That year ended Sept. 1, 2005, and having earned enough to live on, i expect to continue operating this way into the indefinite future. In 2013, having gotten more involved in wider Sharing Economy explorations, i shifted from calling my approach “gift economy” to calling it a “joyful value exchange,” in recognition that i am engaging in direct reciprocity for money rather than purely gifting with no thought of return.

I feel called to this way of working in the world as a way of serving life. The society i live in now fosters a culture of consumption based on scarcity, while pretending the world has infinite resources. I believe that the society of the future, if there is to be one, will be the reverse: nurturing a culture of sharing based on abundance, while recognizing nature’s limitations. For me, shifting to a sharing economy is a way of expressing my love for, and faith in, that future world—one small step toward birthing it into being.

“At the deepest level, there is no giver, no gift and no recipient—only the Universe rearranging itself.”—Ronald Arms

For more information on Gift Economy . . .

One [formerly] leading resource: Shareable.net.
Website, newsletter, research reports, bookstore, and tons more. 2022 update: Has broadened and lost focus, no longer publishing near as much original or useful content, but archives likely still hold a lot of valuable material.

2022 update:  Offers & Needs Market from the Post Growth Institute.  How to run the process, etc.

Practicing Law in the Sharing Economy by Janelle Orsi. This book from ABA press offers a comprehensive overview, bringing together such creations as B corps, time banks, creative commons, crowdsourcing for capital, car-sharing, couchsurfing, and more into one coherent vision of the new economy that is reshaping how we live. The new sharing economy calls for revised rules and a host of newly skilled practitioners, and Janelle is helping people travel that road. Appropriate to (and readable by!) an audience way beyond lawyers, this book is for anyone helping create new transactions or the organizations to support them. (Includes a short section by Tree on consensus.)

Tree’s current favorite book on the coming gift economy: Sacred Economics: Money, Gift & Society in the Age of Transition, by Charles Eisenstein. In a speech entitled “Confronting Empire” (delivered at the World Social Forum in 2003), Indian author Arundhati Roy closed with this: “Another world is not only possible, she is on her way. On a quiet day, I can hear her breathing.” That kind of describes how i felt reading Charles Eisenstein’s book. Not only does he sing the virtues of the gift economy in a way so filled with everyday examples of what is/has been/and could be that i can nearly taste it, he also contextualizes the whole examination in a story both spiritual and practical, the arc of our transformation from the age of separation to the age of reunion. Delightful, inspiring, grounded.

How to Start a Gift Circle, by Alpha Lo. From the blog “Trust is the Only Currency.”

Two websites to support localized gifting: Kindista (started in Oregon), and StreetBank (based in the UK). Both support enrollment from anywhere in the world.

The Salwen family moved into a house half the size, sold their old house and gave half the money to charity—wow.

2022 update:  Lovely piece by Miki Kashtan, The Impossible Will Take a Little While – Experiments in Gift Economy (Part I).  Just what it says, and a thoughtful and cogent exploration of the obstacles to gifting, as well.

Vinod Sreedhar, social entrepreneur and workshop facilitator in
India, writes openly of his early steps into the gift economy.

Shanaka Fernando’s Lentil As Anything restaurant in Australia has been operating for 10 years with no prices on the menu, presently serving 1,500 people/day. Here’s another video with him explaining how his history led to his later choices. For a newer example in the United States, see Cafe 180 in Denver.

Some people are living without money through a combination of gifting, self-sufficiency, barter and more. See Mark Boyle’s story in the UK and Heidemarie Schwermer’s in Germany.

Austrian millionaire Karl Rabeder is giving away every penny of his £3 million fortune after realising his riches were making him unhappy. Read the story here.

For one vision of how a gift economy might emerge from a neighborhood, see How to Disappear, a beautiful online book associated with Riverbank Neighbors in Chicago.

In Estonia, the Bank of Happiness emerged as a response to economic troubles.

Called dama, gifting is an established way of life in Mali.

Musician Jane Siberry (aka Issa) distributes her music using “self-determined pricing.” Read about it in this story from NPR.

Gifting and the Gift Economy by Tom Atlee

The connection between the Occupy movement and Gift Economy, from Carolyn Elliott over at Shareable.net: The Poetics of Occupation: On Gift Logic.

Invisible Spirit Killers of the Modern World by Amanda Krichbaum.  Outlines how the system currently functions and an invitation to participate in doing things differently.

Two interesting essays on the concept and contemporary practices from Dave Pollard’s “How to Save the World” blog. The first post provides a good, short overview of the subject. The second, called “Can We Make the Gift Economy Work?” talks about major challenges to it and what to do about them.

The Gift Economy by Gifford Pinchot

37 ways to join the Gift Economy by Beverly Feldman and Charles Gray in YES! Magazine

Eisenstein, Charles. Sacred Economics: Money, Gift & Society in the Age of Transition. Evolver Editions, 2011. Fantastic—a deep study of money and economics that grounds the transition to a gift economy in the deeper story of the Great Turning
from the age of separation to the age of reunion.

Osteen, Mark (ed.). The
Question of the Gift: Essays Across Disciplines. Routledge, 2002.

Thank you, thank you! You were the key to making the first WOW symposium the success it was.